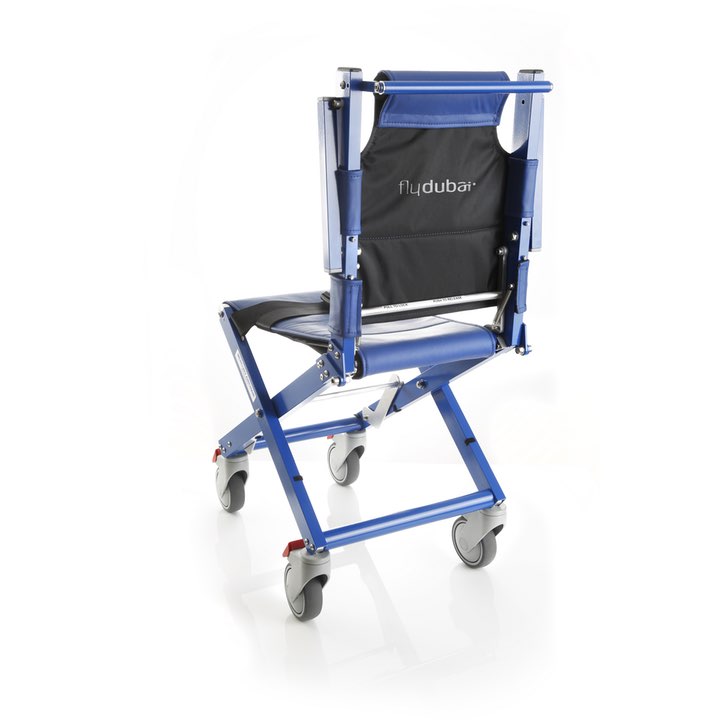 As the logos suggest, our customers are airlines, rather than airports who support people with reduced mobility in different ways.

There can be areas of an airport where passengers are able to use their own wheelchair, but normally they check them in with their luggage. The airport then provides an alternative method of transport to the departure gate. However, once the passenger reaches the door of the aircraft they have to be transferred to an on-board wheelchair, a wheelchair small enough to be wheeled around the narrow aisles of an aircraft.

Once transfered to the Airchair, the passenger will be wheeled to his or her seat by a member of the Cabin Crew. The Airchair is fitted with swivel castors so that the chair can moved up and down the aisle and around the cabin easily and safely.

A retractable backrest enables the passenger to transfer to their seat easily, by simply sliding from the Airchair to their airline seat. Where required, carers, or cabin crew can move closer to assist, without having to stretch over the back of the wheelchair, therefore reducing the risk of injury.

The Airchair can also be used to access facilities such as the toilet during a flight. This ensures the passenger enjoys a safe and dignified journey which is extremely important to the passenger but important to airlines as well.

Around 40 million flights each year are taken by people reliant on wheelchair use and this number is increasing. Airlines are expected and want to provide these passengers with a positive experience and that includes having an on-board wheelchair on each aircraft.

There is ongoing discussion as to whether passengers can travel in their own wheelchairs from the start to the end of their journey, including taking their wheelchair on-board the aircraft. Aircraft seats are designed to meet rigorous safety standards for good reason and therefore testing all different types of wheelchair and approving them for travel on an aircraft would be problematic.

During take off and landing the aircraft is subjected to substantial G forces. Any equipment fixed in an aircraft has to be able to withstand this and has gone through rigourous testing and approval in order to comply to the stringent build standards. Re-engineering conventional wheelchairs to comply with these standards would not only be costly but impractical too.

Another consideration has been to remove existing cabin seats and provide areas for personal wheelchairs to be fixed with a tethering system. Currently this is not seen as viable because of regulations but also because of prohibitive costs. Consequently, the best solution is for airlines to provide an on-board wheelchair, such as Airchair.

Providing an on-board wheelchair means that passengers with reduced mobility can travel safely and be transported around the cabin easily and with dignity.

But don’t take our word for it, read comments from airlines who use the Airchair on all their flights.

Speak to an advisor today